I feel the need to refer to you all and clarify the current moment of my rowing career, directly linked to not going on World Championship in Bulgaria. The reasons are closely related to the unsatisfactory state of the form, which has mostly affected my health problems from the beginning of the season.

The normal course of preparation in the winter period was crucially influenced by removal of 4 mole on the back. I was thinking: you’d better remove them now than next year! First I lost a full month of training waiting my skin to heal which was much more than expected. Then I tried to compensate by a huge workload with full capacity what later manifested itself with a injury and back pain.

I trained in the hope that all of this could be compensated in the months to come, but I was again convinced that nothing could be achieved overnight. Preparations for the European Championship in Glasgow gave me a false feeling that I suceeded to compensate something, in practice this proved to be worth only 15th place.

I am an athlete who always gives his best and in the current situation this could only lead to injury. Since now I have a similar feeling like before Euro and didn’t want to risk injury. After much thought, my team and I have decided that it is better not to compete on World Championship.

At this moment for me starts the “Operation Tokyo 2020”. In the upcoming season I will have to battle for the Olympic Norm and will need to prepare the best I can. Moving from scratch, confident in my great potential and deeply convinced in my outlined ambitions. All I have done so far is with fanatical work, so I know that I will return to the top of the world rowing.

Now, first of all, I would like to wish all the best to my friends from Croatian rowing team at the World Championship, Sinković Brothers in the pair and to Luka Radonić and Luka Baričević in the double.

Thanks everyone for understanding and great support! 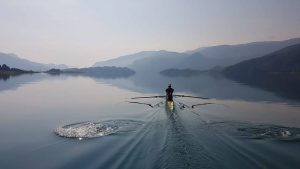 OLIMPIC CHANNEL: Ep 6. Anatomy of a Rower: Does Martin have the strongest legs...